What Our Clients Say About Us

“After 10 years of marriage I learned that my husband was having an affair with another woman. But the information didn’t just fall out of the sky into my lap. It was a slow and painful process of dealing with suspicions and doubts for almost a year before I was certain that he was seeing the other woman. There were many little “clues” along the way, and I was never able to get enough information to prove my case. So I just kept quiet and never confronted him with my suspicions. I lived in a near constant state of depression and began to think that it was all just my imagination.

“My best friend talked me into hiring a private investigator in order to either prove or disprove my suspicions so I could put it to rest and get on with my life. I met with an investigator from Stillinger Investigations and told him everything I knew or suspected. I was treated with the utmost respect and professionalism and hired them on the spot. My husband was going out of town on business that weekend. As it turned out, he never left town at all. The investigators videotaped him meeting the other woman at a local shopping center where she got in the car with him. From there they went to a local motel where they stayed the night.

“Stillinger Investigations documented every move and was able to gather all the information I needed to prove my case. I have been divorced almost a year now, and I have my life back. After being confronted with the evidence, my husband didn’t bother to contest the divorce. I hate that my marriage failed. But I hate even more that I lived in misery so long before hiring a professional. I strongly encourage anyone who feels betrayed by their spouse to talk to Stillinger Investigations. They were there for me and gave me my life back. While the evidence they provided me certainly wasn’t pretty, it was the truth. And the truth was far better than living with all the lies.”

Our firm retained Brian Stillinger/Stillinger Investigations in one of our more important litigation cases. The case required a good bit of investigation and research on the respective parties and witnesses. Brian and his partners’ work was outstanding. They have resources available that are unusual in a mid-market city such as Columbia. I made the remark to him, and I meant it, that his kind of work and professionalism would be on the cutting edge in L.A. or New York, and we are fortunate to have him in our city. He responds quickly, is almost always available, and always accomplishes what he says he’s going to do. On top of that, his fees are reasonable. I could not offer a higher recommendation.

As a local Columbia, SC attorney, I have used the services of Stillinger Investigations many times. Their investigative skills have proven invaluable in getting the evidence I need to assist my clients. They are professionals in every respect and have always performed as expected. I have used them in both civil and criminal cases, and I know that I can always count on them for the really tough investigations. They have an impressive array of investigative tools at their disposal such as covert cameras, surveillance vehicles, Tech, and bug detection equipment. I would strongly recommend Stillinger Investigations to anyone who needs the services of a private investigator. I’ve tried other agencies, and I do know the difference.

Stillinger Investigations assisted me in a very important case. The investigator, a licensed attorney, was professional, reliable, and ethical. I felt that she was interested in the case and could also look at things from a lawyer’s perspective as well as an investigator’s.

I want to recommend Brian and his staff to anyone who is in need of a private investigation at any level.  Brian and his staff were extremely professional and, most importantly, they were very effective for me.  I have and continue to let anyone who asks or who I know is in need of a private investigator know that Stillinger Investigations is as good as it gets in Columbia, South Carolina.

What Our Clients Say About Us

Lexington SC is a small town and it is hard to find someone you can trust with sensitive matters. A friend told me about Stillinger and they were incredibly professional and took care of me quietly.

Always a had a great experience using Stillinger investigations. These guys are truly the best private investigators in the business are and I can sincerely recommend them to anyone in need of critical information. A+

The best detective agency I’ve ever used for solving difficult and unusual cases.

My firm recently hired Stillinger Investigations investigations for a complex litigation case and we were very pleased with the the results. They were very responsive, professional and effective. We would certainly hire them again.

These guys are the best ! Me and my family will be forever grateful for their amazing service. Very professional and honest . Thank you so much . I highly recommend them.

I’m used different private investigator companies over the years and this by far has been the best experience and produced the most results for me. I definitely recommend Stillenger over the competition in SC!

I had never consulted a private investigation service before so I consider myself extremely lucky to have found Stillinger and its devoted owner. They helped me uncover the truth about a very deceitful person and prevented me from incurring substantial losses in my business!

There are so many private investigators out there i went by ratings and honestly top notch work. i was so pleased i sent a thank you gift, 10 stars in my book! i would use this company again without a second thought!

I needed help with a messy divorce and child custody case and Stillinger was the perfect fit to help in a difficult situation. THX!!!

I spoke with Brian Stillinger over the phone and they immediately got to work on my situation. They were very helpful and the cost was extremely reasonable. I am an attorney who practices in another state I needed them to do some investigatory work in Rock Hill and they were very thorough.

Stillinger Investigations has the best private investigators your money can buy. Thanks for all you guys have done for me and my company, I’ll be sure to use you again in the future.

The best private investigator agency I’ve ever used, especially when reliability and confidentiality are of the utmost importance.

Best in the business delivered the results I wanted under budget and faster than expected ! Would recommend them to anyone wanting results.

Discreet, professional and confidential. Very pleased with my results. Thank you Stillinger Investigations.

After calling a few different PI’s in Rock Hill and Charlotte, i realized this firm had their stuff together. They answered my call right away and spent about 30 min on the phone with me helping guide me without even talking/asking about money.

Stillinger Investigations is quick, efficient, and professional. A+ company!! I totally recommend them if you ever are in need of a private investigator .

Incredible staff. They came highly referred by a colleague and I am glad that I chose Stillinger Investigations to work on my case. I also really liked how everything was handled with such high level of professionalism and discretion, and how they had an expert for each complex task.

We needed some sensitive data recovered from an employee hard drive and Stillinger’s digital forensics was amazing!

Stillinger Investigations handled a matter for a close family member. Great customer service, timely responses and attention to detail in understanding the situation. Completed exactly what was asked with the utmost thoroughness and would highly recommend to anyone.

Five stars for Brian! I think he is doing a great job, especially given the nature of this ongoing case. I couldn’t ask for a better criminal investigator.

Stillinger was recommended by a close friend for having unique resources and being very discreet. I am glad that I chose them.

As a large business owner who often hires new employees and forms new partnerships, having a resourceful investigator on your side who can find any information on anybody is an incredibly valuable asset to my company. If you’re in need of accurate and reliable truth finding to make strategic decisions, hire Stillinger Investigations.

Finding a great private investigator wasn’t easy. I initially hired one company due to their low rates – which should have been a red flag. Well, it turned out that they were completely unqualified to handle my case causing me even more of a pain, so learn from my mistakes and hire the best private investigator in Columbia SC the first time. Hire Brian Stillinger and his team of veterans to do the job right!

I highly recommend Stillinger Investigations in Columbia. They are very professional, quick to respond and helpful.

These guys are very good at what they do. My child custody issue over my daughter was rough. Thankfully my attorney suggested talking with Stillinger Investigations about my situation.
After making the decision to move forward, it was smooth sailing. They provided the evidence needed to prove my case and get legal custody of her! 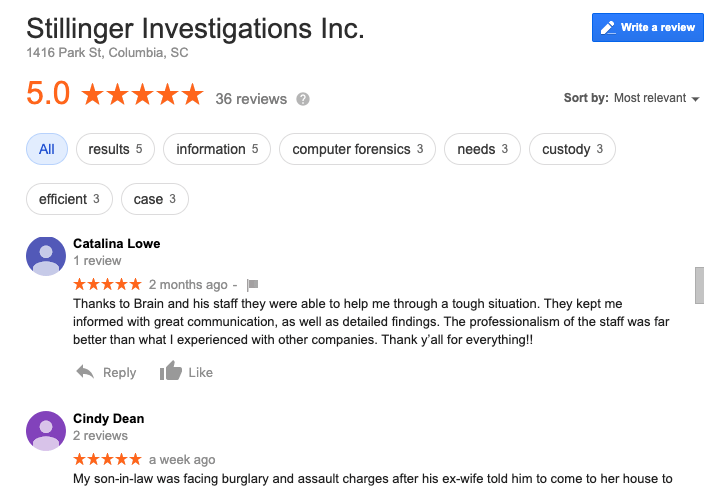 Disclaimer: At Stillinger Investigations our private investigators strive to conduct investigations with integrity. At no time, can we guarantee the results from our investigations. On every case, expense and court appearances are in no way contingent upon or related to the outcome of any legal, court action, or proceeding.  Also, if the Client does not have an attorney, they should be made aware that the outcome of the investigation may or may not have any bearing on their case.